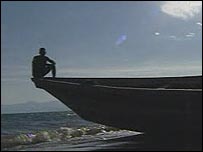 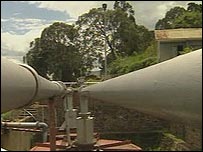 Well since Africa is going to bear the brunt of climate change, and the continent is already ravaged by war, disease, and poverty, it’s nice to hear something positive for once:

The calm, blue waters of Lake Kivu in the west of Rwanda belie the energy powerhouse it stores deep underwater.

Hundreds of metres down in the inky blackness, the lake is holding enough unexploited energy to meet Rwanda’s needs for 200 years.

Rotting vegetation which has been deposited for millions of years at the bottom of the lake is giving off a constant regenerating supply of methane gas.

Some of that gas bubbles to the surface where it is carried away and dispersed on the wind, but much of it, under massive pressure, is dissolved in the water at the bottom of the lake, which is in places more than 600m deep.

Methane is a combustible gas ideal for use in electricity generation and heating, it is the main component of “natural gas” fed to cookers all over the world.

Then again, although the lake may be a new energy source, it isn’t entirely positive:

Lake Kivu is what is known as a “turnover lake”. Geological evidence from around the lake shows that every 1,000 years or so there have been cataclysmic events which have wiped out all animal life in a huge radius surrounding the lake.

What happens is that gradually so much methane and carbon dioxide is dissolved in the water that it begins to acquire buoyancy. Instead of this being released gradually there is a sudden huge explosion, where the lake effectively turns over.

The gas laden water from the bottom of the lake surges to the surface, releasing billions of cubic metres of gas; this settle like a huge toxic blanket over the surrounding area.

It is heavier than air so all the oxygen is forced out and all life is suffocated. This is what happened at Lake Nyos in Cameroon in 1986, when 1,700 people were killed. Lake Kivu is hundreds of times bigger than Lake Nyos and it is estimated that more than two million people would die.

Extracting methane from the lake will help to mitigate this cataclysmic eventuality.