On the Road, Hope for a Zero Pollution Car 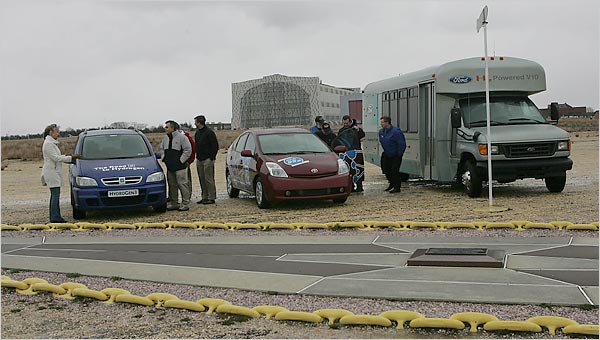 So the three hydrogen-fueled vehicles that gathered at the Hindenburg crash site are harbingers of the future, proof that all of hydrogenâ€™s potential in transportation did not go up in flames 70 years ago.

The spot where the Hindenburg met its end is now a historic landmark. A heavy yellow anchor chain surrounds a concrete pad replicating the size, shape, and final resting place of the Hindenburgâ€™s control car. Rick Zitarosa, historian of the Navy Lakehurst Historical Society, said the Navy intended to preserve the site in its current form.

The vehicles here, and three other experimental cars driven elsewhere, cover a broad spectrum of hydrogen possibilities. Here are highlights…

A Universe of Promise (and a Tankful of Caveats)Â 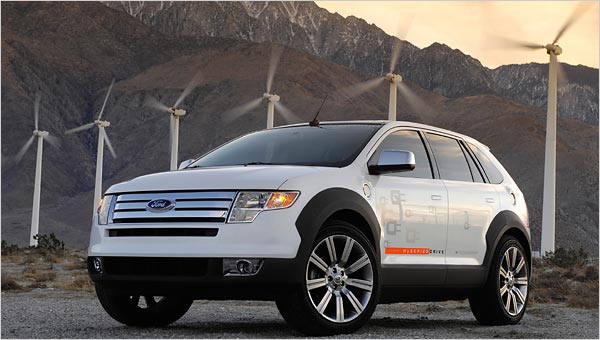 At the moment, hydrogen seems to be the most practical way to power vehicles that do not emit carbon dioxide, the principal greenhouse gas. But despite considerable research, many hurdles remain. Here are some questions and answers….

Why worry about transporting hydrogen when you could just produced it on-demand in your vehicle? That’s the idea of ECOtality‘s Hydratus technology. The system operates in conjunction with a hydrogen fuel cell, and produces hydrogen from a reaction between magnesium and water. Other companies are working on similar concepts, using boron, and aluminum. The company plans to implement the Hydratus system on fuel cell buses like the one pictured above. The Hydratus buses should have a $200,000 premium over their conventional counterparts, which sell for about $300,000. The half-million dollar vehicles will have a range of about 155miles, or 15 hours of travel, between refuelings.

“Hydrogen on-demand is going to be what catapults hydrogen from being a great concept to a great reality.”

Working together on the project, NASA’s Jet Propulsion Laboratory and ECOtality are now reporting that they have doubled the mileage over their pervious version, but at the same weight and volume.

The Hydratus system overcomes many of the issues hydrogen faces today, namely transportation and storage, which are not needed with the on-demand H2 system:

“Compressed hydrogen is the least likely to be the prevailing system when the shakeout is done and over with. It’s expensive to produce, transport and store, and it’s inefficient in form to produce and store”

The only byproduct of the process other than hydrogen and water is a powdered form of magnesium oxide, which stays in the system until removed. Filling stations for the Hydratus vehicles would use a special pump than pumps in new magnesium pellets and water and pumps out the spent magnesium oxide. The entire re-fueling process should take three to five minutes.

Interestingly, the spent magnesium oxide powder is recyclable and can be made into usable magnesium pellets for the filling stations,

“Magnesium is the fourth most-common mineral in the world and could be extracted from the sea. It’s common and available in almost all countries. The magnesium, once it’s put into the system, is a contained system. So there is no need to continue mining”

Unsurprisingly, the technology isn’t cheap. The cost for fuel is about $4.80 per liter (about $17.50 per gallon), or $2.80 per liter if the filling station recycles its own spent magnesium.

The Premacy Hydrogen RE Hybrid runs on a hydrogen-fueled rotary engine paired with 30kW electric motor.Â  The hybridâ€™s power will be increased by 40%, and it will offer a hydrogen range of 200 km (124 miles), double the 100 km of the first versions of the concept.

Really?Â  Tell us something we didn’t already know…

Forget hydrogen and fuel-cell cars, according a variety of speakers at an investor conference today. The future is clearly pure electric pluggable cars, they said.

â€œWe saw a strong shift this year away from the focus on hydrogen and fuel cells as the car of the future to the electric or hybrid car. Small companies like Tesla, and even big companies like GM, with its Volt and flex fuel infrastructure, are just the beginning,â€ said Ira Ehrenpreis, general partner of venture firm Technology Partners. Ehrenpreis gave the opening address at the Clean-tech Investor Summit in Palm Springs, California.

â€œHydrogen is not a fuel. You canâ€™t go mine it anywhere, you have to make it. Youâ€™re typically making it with electricity and water, compressing it, putting it in a car and feeding it into a fuel cell. The efficiency of that system is about a quarter of the efficiency of an electric car today. So the same amount of electricity drives your car one quarter of the distance. And letâ€™s not even talk about infrastructure, distribution and the dangers of a 10,000 PSI tank in your car.â€

BMW is introducing its new 1 Seriesâ€”which includes the 118d, the most fuel-efficient production vehicle yet from BMWâ€”in Europe with a range of fuel-saving technologies. Brake Energy Regeneration, an Automatic Start-Stop function, and Electric Power Steering are combined with lower rolling resistance tires and a gearshift change indicator to encourage economical driving. Read more at Green Car Congress

Mazda engineers have placed a rotary engine in their Mazda 5 model, a small wagon that is sold here in the States. The rotary engine can run on hydrogen or standard gas. Additionally, they have added an electric motor to the vehicle, making this a gas/hydrogen/electric hybrid… Read more at AutoBlogGreen

Hot on the heals of the announcement that Wal-Mart is researching dual-mode, diesel-electric drivetrains in its massive truck fleet is the news that Volvo Group has proven its I-SAM hybrid truck technology. Volvo has shown that its I-SAM (Integrated Starter Alternator Motor) technology can deliver fuel savings of up to 35 percent, depending on application and driving conditions in heavy-duty applications.

Honda Motor Co. thinks it will be able to mass produce fuel-cell vehicles for the general market by 2018, Honda President Takeo Fukui said in a recent interview with Kyodo News.

Honda plans to begin leasing a hydrogen fuel-cell vehicle based on its FCX Concept (pictured above) in Japan and the United States in 2008. The stack in the current FCX Concept delivers 100 kW of power, and the vehicle has a range of 560 kilometers (350 miles)

- where are we getting the hydrogen from? (right now it’s almost all derived from fossil fuels, i.e. natural gas)

- will there be a hydrogen infrastructure in place?

- will engineers have figured out how to economically and safely store compressed hydrogen on board vehicles?

- will battery technology have advanced to the point that EV cars are a better option (likely, although the oil companies would rather us buy fuel cells so we need to purchase hydrogen, derived from their fossil fuels…)

[Ed:Â  Check out The Hype about Hydrogen]