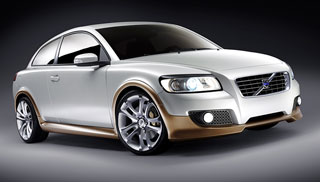 Swedish automaker Volvo is developing a hybrid drive system for its all-new C30 hatchback. The system is a series hybrid, meaning the combustion engine never powers the wheels directly, but instead turns a generator to power an electric motor. (e.g. the Chevy Volt)

Rather than a gasoline engine, the car will use a diesel powerplant, according to Germany’s Autobild. The car will be capable of traveling about 45 miles on batteries alone. It will also feature plug-in capability, meaning owners can charge their vehicle at home.

The National VegOil Board (NVOB) has got the results of a new emissions test conducted at an EPA-certified lab, which compared Ultra Low Sulfur Diesel (ULSD) with pure canola oil running in a modified 2002 Volkswagen Golf TDI. The results? Pure veggie oil puts out less THC (no, not that THC), CO2, CO and NOx compared to ULSD. Oh yeah, and it produces no sulfur.

Emissions tests by Greasecar, a company famous for its veggie oil conversion kits, even shows that WVO (waste vegetable oil – different from the pure virgin canola oil in the NVOB test) produces less emissions than pure B100 biodiesel. (note: the Greasecar test compares WVO to regular diesel, not the new ULSD fuel. Also, in both the NVOB and Greasecar tests, the diesel vehicles used do not have the new emissions controls like BlueTec that take care of NOX emissions and which will begin to be available on 2008 model vehicles).

The EPA does not currently consider vegetable oil to be a legal fuel. The National VegOil Board press release seeks to explain why the EPA should alter its policy:

“The result of this work verifies that a properly converted modern automotive diesel can be fueled by vegetable oil and meet of exceed the requirements of the EPA emission standards, giving better results than ULSD diesel from a renewable fuel.”

“A number of European countries have accepted the use of vegetable oil as an alternative diesel engine fuel. It is listed as one of the alternative fuel options for the European Union Biofuels Directive that has recently been increased to require all EU countries to obtain 5.75% of fuel from renewable sources by 2010.”

The European Commission has announced plans to force energy companies to produce greener fuels.Â  It says it will propose amendments to a directive on fuel quality, which will require a 10% cut in the CO2 released during production and use of the fuel.

The changes would make companies use more biofuel, and develop greener biofuels where the production process results in lower CO2 emissions.

A California lawmaker wants to make his state the first to ban incandescent lightbulbs as part of California’s groundbreaking initiatives to reduce energy use and greenhouse gases blamed for global warming.

The ZAP-X will use in-hub electric motors in place of the V-6 gas engine. According to the Zap! press release the combination of motors will provide 644hp in all wheel drive mode and potentially drive the aluminum-structured vehicle to 155 mph. The hub motors will also allow extra batteries and an auxiliary power unit to be mounted under hood. Zap! is estimating the range at 350 miles and a recharge time of 10 minutes, although that fast charge time would almost assuredly have to be via a 480V charging system.

It seems as though Lotus is becoming a big player in the EV market, working with Tesla on their roadster and upcoming sedan, and also the Obvio sports car with Zap! (and now the ZAP-X)

WASHINGTON – Two private advocacy groups told a congressional hearing Tuesday that climate scientists at seven government agencies say they have been subjected to political pressure aimed at downplaying the threat of global warming.

The groups presented a survey that shows two in five of the 279 climate scientists who responded to a questionnaire complained that some of their scientific papers had been edited in a way that changed their meaning. Nearly half of the 279 said in response to another question that at some point they had been told to delete reference to “global warming” or “climate change” from a report.

The Gulf Coast is littered with the carcasses of unused oil equipment. Now those structures are being repurposed to build the first offshore wind farm in the United States…

The port of Iberia has never been busier. Situated on a narrow canal leading to the Louisiana coastline, the docks here throb with the sound of tugboats towing oil platforms to and from their anchorages in the Gulf of Mexico. When a drilling site is depleted, the platforms return to port; the docks are littered with rusting steel hulks waiting for their next run.

In December, though, one of these platforms, stripped and refurbished by a local startup, returned to sea with a new mission. The first of a flotilla to come, it carried wind-monitoring equipment as well as radar for tracking migratory birds. Those that follow will be topped not by drilling rigs but by windmills. The turbines are bound for an 18-square-mile area roughly 10 miles off the coast of Galveston, Texas, where the first offshore wind farm in the US is under construction. Thatâ€™s right: The flower of sustainable energy is blooming in oil country. Get ready for the Great Texas Wind Rush.

Shell has signed an important deal to help Iran develop a major gas field, ignoring growing pressure from George Bush to isolate the country for being part of what he alleges is an “axis of evil”.

The Anglo-Dutch group, which is struggling to bring more momentum to its business after being forced to hand over vital Russian reserves at Sakhalin island to the Kremlin, confirmed it had finally reached agreement on various aspects of its “Persian LNG” – liquefied natural gas – project centred on the South Pars gas field. It “fell far short” (Washington Post editorial) and offers only “marginal” gains (New York Times editorial) and is “nonsense” (Charles Krauthammer) and “isn’t much” (Thomas Friedman). All these are descriptions of the energy policy proposal in George W. Bush’s State of the Union address last week. They don’t match the plan itself.

Last week Bush proposed something environmentalists, energy analysts, greenhouse-effect researchers, and national-security experts have spent 20 years pleading for: a major strengthening of federal mileage standards for cars, SUVs, and pickup trucks. The number-one failing of U.S. energy policy is that vehicle mile-per-gallon standards have not been made stricter in two decades.

Nothing the United States can do in energy policy is more important than an mpg increase. Presidents George Herbert Walker Bush, Bill Clinton, and, until last week, George W. Bush had all refused to face the issue of America’s low-mpg vehicles, which are the root of U.S. dependency on Persian Gulf oil and a prime factor in rising U.S. greenhouse-gas emissions. But now Bush favors a radical strengthening of federal mileage rules, and last week to boot became the first Republican president since Gerald Ford to embrace the basic concept of federal mileage regulation (called the Corporate Average Fuel Economy standard).

via NPR’s On Point with Tom Ashbrook:
The day before President Bush laid out new plans for alternative energy and global warming last week, the CEOs of ten major American corporations laid out a plan of their own for tackling climate change.

These were big guys. CEOs of Alcoa and Caterpillar, General Electric and DuPont. Names traditionally more associated with factories and chemicals than with environmentalism.

And here was the surprise: these titans of industry are way out in front on the White House when it comes to fighting global warming.

Skeptics say it’s all about special pleading and companies positioning for handouts and windfalls. But environmentalists are giving the CEOs a big thumbs-up.

This hour On Point: is American industry going green?

To listen to the show, click the link below: