Now, with the scientific evidence pretty much irrefutable, they insist that it doesnâ€™t matter because any serious attempt to curb greenhouse gas emissions is politically and economically impossible.

Behind this claim lies the assumption, explicit or implicit, that any substantial cut in energy use would require a drastic change in the way we live. To be fair, some people in the conservation movement seem to share that assumption.

But the assumption is false. Let me tell you about a real-world counterexample: an advanced economy that has managed to combine rising living standards with a substantial decline in per capita energy consumption, and managed to keep total carbon dioxide emissions more or less flat for two decades, even as both its economy and its population grew rapidly. And it achieved all this without fundamentally changing a lifestyle centered on automobiles and single-family houses.

The name of the economy? California.

Thereâ€™s nothing heroic about Californiaâ€™s energy policy â€” but thatâ€™s precisely the point. Over the years the state has adopted a series of conservation measures that are anything but splashy. Theyâ€™re the kind of drab, colorless stuff that excites only real policy wonks. Yet the cumulative effect has been impressive, if still well short of what we really need to do.

“Construction on a 40 megawatt (MW) solar generation power plant is under way at a former military base in the Saxon region of Germany. The total surface area of the planned photovoltaic (PV) installation? It’s comparable to about 200 soccer fields, said Matthias Willenbacher, cofounder and CEO of the juwi group.

Once completed in 2009, the project will be one of the largest photovoltaic projects ever constructed. Currently the biggest PV plant in the world has an output capacity of around 12 megawatts.

Taking smokestack carbon emissions and turning them into chalk, baking soda, and limestone:

“The bioreactor is a long cylinder containing a packing material that acts as a solid support for the enzyme. The surface of this material has been chemically modified so that the enzymes attach securely. At the top of the cylinder, a water solution is pumped in and flows around the packing material, while gases from a smokestack enter the bottom of the cylinder and bubble up through the solution. The carbon dioxide is absorbed into the solution and then interacts with the enzymes, which convert the greenhouse gas into bicarbonate ions. To end the process, cleaned up air escapes from the top while the bicarbonate solution is extracted for further processing–either back into pure carbon dioxide for long-term geological storage or into a carbonate compound, such as limestone, that can be used by industry.”Â

AHVAZ, Iran — Iran sits on one-tenth of the world’s known oil supplies but is using so much energy these days it may start rationing gasoline as soon as next month.

…a combination of Western sanctions and Iranian policies has discouraged foreign investment in oil fields, causing production to stagnate. The result: Iran’s oil exports could dry up in as little as a decade, according to some who have studied the situation.

The impact would be felt far beyond Iran. The country produced 3.8 million barrels of oil a day in 2006, almost 5% of the world’s total supply, according to the Organization of Petroleum Exporting Countries. It exported an average of about 2.5 million barrels of that each day. Should those sales decline, Iran’s largest customers, Japan and China, would scramble for other supplies, pushing up prices for everyone.

Avoiding an export squeeze is one reason Iran argues it needs to consider nuclear energy. But that ambition has contributed to a diplomatic impasse with the West. Bush administration officials describe Iran’s nuclear program as little more than a ruse to conceal what they say is a hidden effort to build nuclear weapons. Iranian officials deny that, arguing that nuclear plants could handle some of the soaring domestic energy demand, leaving more oil and gas to export and avoiding difficult domestic choices. 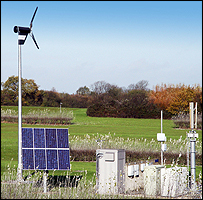 Wind and solar energy could be used to set up mobile phone networks in rural areas of the world without power.

The world’s first mobile phone base station powered by wind and the sun’s rays will soon open in Namibia.Â  The trial follows a pilot held in Swindon, UK, led by Motorola. Mobile firm MTC Namibia will run the cell.

“We firmly believe we need a solution to go into rural areas and the key is speed – we need a quick roll out,” said MTC executive Joachen Traut.Â  “Namibia is a huge country with only two million people – to get power to rural areas is very expensive…You are paying US $8,000 per kilometre to get a grid power line. And to get on the grid you can wait a year or two to get a power line.”

“In Namibia the turbine and solar panels will also be running the base station with traffic on it, the peripheral communications, vsat (satellite transmitter/receiver) and even the protective fencing around the site,” said Linda Brown, GSM Solutions Manager for Motorola UK

She continued, “Capital costs for wind and solar are in the same range as a grid connection. But the roll out time is an advantage; it’s much faster.Â  Operating costs are much better than a grid connection or using diesel.”

Will the car of the future be foldable?

That’s the vision of a team of researchers at the Massachusetts Institute of Technology’s Media Lab. With backing from General Motors Corp., they are building a prototype of a lightweight electric vehicle that can be cheaply mass-produced, rented by commuters under a shared-use business model, and folded and stacked like grocery carts at subway stations or other central sites.

It’s called the City Car, and the key to the concept lies in the design of its wheels. Dreamers have been reinventing the wheel since the days of cave dwellers. But the work underway in “the Cube,” the Media Lab’s basement studio, may be the most ambitious remake yet.

The MIT team has transformed the lowly wheel into a sophisticated robotic drive system that will power the City Car. Embedded in each of its four wheels will be an electric motor, steering and braking mechanisms, suspension, and digital controls, all integrated into sealed units that can be snapped on and off. 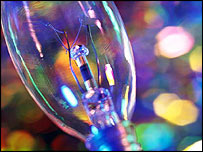 The environment minister said the move could cut the country’s greenhouse gas emissions by 4 million tonnes by 2012.

The decision will make Australia the first country to ban the light bulbs, although the idea has also been proposed in the US state of California.

Cheap solar power poised to undercut oil and gas by half

Within five years, solar power will be cheap enough to compete with carbon-generated electricity, even in Britain, Scandinavia or upper Siberia. In a decade, the cost may have fallen so dramatically that solar cells could undercut oil, gas, coal and nuclear power by up to half. Technology is leaping ahead of a stale political debate about fossil fuels.

Anil Sethi, the chief executive of the Swiss start-up company Flisom, says he looks forward to the day – not so far off – when entire cities in America and Europe generate their heating, lighting and air-conditioning needs from solar films on buildings with enough left over to feed a surplus back into the grid.

The secret? Mr Sethi lovingly cradles a piece of dark polymer foil, as thin a sheet of paper. It is 200 times lighter than the normal glass-based solar materials, which require expensive substrates and roof support. Indeed, it is so light it can be stuck to the sides of buildings.

“It’ll even work on a cold, grey, cloudy day in England, which still produces 25pc to 30pc of the optimal light level. That is enough, if you cover half the roof,” he said.

Instead of making you spring for $25,000 or more in gear, CitizenrÄ“ says it will loan you a complete rooftop solar power system, install it for free and sell you back the power it generates at a fixed rate below what your utility charges. The company hopes to make back its investment with those monthly payments, augmented by federal tax credits and rebates.

Once it’s ready to start installing systems — sometime after September, the company says — homeowners will pony up a refundable security deposit of $500 for up to a 5-kilowatt system, and $100 more per additional kilowatt. Customers lock in a fixed price for the power based on current market rates, with a contract for either five or 25 years. They pay for all the power generated, even unused power, but the company tailors each system to fit the household’s power consumption. At the end of the contract, the homeowner can optionally purchase the hardware outright

American meat eaters are responsible for 1.5 more tons of carbon dioxide per person than vegetarians every year:

Livestock are responsible for 18 percent of greenhouse-gas emissions as measured in carbon dioxide equivalent, reports the FAO. This includes 9 percent of all CO2 emissions, 37 percent of methane, and 65 percent of nitrous oxide. Altogether, that’s more than the emissions caused by transportation.

Methane could become a greater problem if the permafrost in northern latitudes thaws with increasing temperatures, releasing the gas now trapped below decaying vegetation. What’s more certain is that emissions of these gases can spike as humans consume more livestock products.

All the worldâ€™s extra oil supply is likely to come from expensive and environmentally damaging unconventional sources within 15 years, according to a detailed study.

This will mean increasing reliance on hard-to-develop sources of energy such as the Canadian oil sands and Venezuelaâ€™s Orinoco tar belt.

Royal Dutch Shell and Total of Europe and ExxonMobil and Chevron, the US-based energy groups, have already begun to invest heavily in Canada and Venezuela.Â  Others â€“ including Chinese energy groups â€“ are looking at the possibility of extracting heavy oil from Madagascar.

But the challenge is huge, said Matthew Simmons, an industry banker who sent shock waves through the oil world when he questioned whether Saudi Arabia, the most important oil source, would be able to continue to expand production.

â€œThe ability to extract this heavy oil in significant volumes is still non-existent,â€ he said in a recent speech.Â  â€œWorse, it takes vast quantities of scarce and valuable potable water and natural gas to turn unusable oil into heavy low-quality oil.â€

â€œIn a sense, this exercise is like turning gold into lead,â€ Mr Simmons said.