If you missed Pivot East, there’s some interesting things coming out of Kenya- a recent IPO48 competition winner, a farming tool for connecting buyers with crops seems awfully useful.

A new generation of green teenagers are prepared to support radical measures to help the planet, says a new study. A survey of 16- to 19-year-olds by the Future Foundation found more than one in eight (13%) supported a ban on traveling by air for leisure purposes, while one in 10 say they would back a ban on cars if global warming continues to worsen.Â  Almost 10% even say they would be prepared to take part in guerrilla activities carried out by environmental groups [click the title of this post to read the full article].

Richie Hawtin, Berlin-based techno DJ, has started a campaign with his record label Minus to get musicians of the electronic persuasion to reduce their carbon footprint. From the official press release:

In response to the times we live in, and due to the ever-increasing amount of proof regarding the impact of human activity on our planet, I am pleased to announce our current environmental initiative. The aim of this strategy is to one day become a carbon neutral company. I also hope that our efforts will both encourage and inspire other musicians, DJ’s & entertainment related companies/individuals to find their own ways to limit their impact on global climate change.

Hawtin is focusing initially on emissions resultant from his constant air travel and Minus’s manufacturing practices. To offset the dirty air travel of himself and all the Minus employees he has been buying carbon credits through Berlin-based Atmosfair, which sources their carbon credits through Gold Standard certified projects. The manufacturing practices are a little trickier for a music company since there are so many of us still who enjoy getting our music in physical form, whether it by vinyl or CD (myself included…). But, Minus has revamped their entire manufacturing process so that it involves zero plastic and instead uses recycled or FSC certified sustainable paper. For the rest of the digital world, Minus is working to get all their music available digitally on their own site, and on digital club music superstore Beatport. In the future, Hawtin hopes to take the iniative further by investing the money that is going into the carbon offsets into actual sustainable energy projects.
Check out the press release at m-nus.com (in the top right corner) or urb.com. And for your viewing pleasure, an interview with Hawtin on his green initiative by Beatport:
[youtube]http://www.youtube.com/watch?v=RJ8qjV21aZs[/youtube]

“Imagine a national transit system that runs on solar energy and wind power. Now imagine that it consists of recycled airplanes speeding along elevated tracks.”

This is the vision of Mass Tram America and its founder Ben Missler, an ex-Boeing engineer who wants to use the carcases of old Boeing jets (normally scrapped for metal) fueled with solar, wind and fuel cells as traveler trains that run up above traffic at 150 mph, suspended on a monorail. How it works:

… where no architect has gone before. As many of you may have heard, Sir Norman + Partners were chosen to design the first commercial ‘spaceport’ – the New Mexico Spaceport Authority Building [yes, the New Mexico Spaceport Authority really exists], run by the appropriately named Virgin Galactic. Now the design has been released [as of last week, I believe], revealing an interesting futuristic/alien looking spaceport that I think looks a lot like the cross between some extra-terrestrial mothership and a crop circle.

Read the rest at Architecture.mnp

It all started on Wednesday, May 30, when NPR Morning Edition’s Steve Inskeep interviewed Greg Easterbrook, a contributing writer to WIRED magazine. Easterbrook criticizes NASA’s recent priorities in a not-so subtly titled article, How NASA Screwed Up (And Four Ways to Fix It), in WIRED issue 15.06. In said article he claims NASA is wasting tax dollars on building a “pointless Motel 6 on the moon,” among other things, when they should be focusing on more practical studies, such as curbing global warming.

Here is a set of rational priorities for the National Aeronautics and Space Administration, in descending order of importance: (1) Conduct research, particularly environmental research, on Earth, the sun, and Venus, the most Earth-like planet. (2) Locate asteroids and comets that might strike Earth, and devise a practical means of deflecting them. (3) Increase humanity’s store of knowledge by studying the distant universe. (4) Figure out a way to replace today’s chemical rockets with a much cheaper way to reach Earth orbit.

This attack on NASA lead to a rebuttal by NASA administrator Michael Griffen on Thursday’s Morning Edition on NPR. In his interview with Steve Inskeep, Griffen defended the space program’s mission to build a permanent base on the moon. He also acknowledged the scientific evidence of global warming and mankind’s probable influence on climate change. He would not concede, however, that warming is a problem that needs to be handled and he rather clearly gave his opinion that it is not NASA’s job to handle it.

Nowhere in NASA’s authorization, which of course governs what we do, is there anything at all telling us that we should take actions to affect climate change in either one way or another. We study global climate change, that is in our authorization, we think we do it rather well. I’m proud of that, but NASA is not an agency chartered to, quote, battle climate change.

Later Thursday afternoon, on NPR’s Day to Day with Madeline Brand, NASA scientist Jim Hansen, a climate change expert at the Goddard Institute for Space Studies, seemed stunned by Griffen’s comments. His department at NASA recently published a paper that concludes if climate change continues in the direction it is going there will be “devastating implications for many people on the planet”. Hansen called Griffen’s assertions “remarkably uninformed”. Hansen also explained how NASA’s funding directed toward research on climate change has recently been cut by 30%. Ironically, Hansen’s primary reason for being on the show was to comment on President Bush’s recent announcement of a new strategy on Global Warming.

“Time is really running out,” Hansen says. “If we don’t begin to make some changes in our emissions, reducing greenhouse gas emissions, we’re going to get some really large climate changes.”

It seems NASA needs to get its story straight and its priorities in line.

The aerospike engine is a type of rocket engine that maintains its aerodynamic efficiency across a wide range of altitudes through the use of an aerospike nozzle. For this reason the nozzle is sometimes referred to as an altitude-compensating nozzle. A vehicle with an aerospike engine uses 25â€“30% less fuel at low altitudes, where most missions have the greatest need for thrust. Aerospike engines have been studied for a number of years and are the baseline engines for many single-stage-to-orbit (SSTO) designs and were also a strong contender for the Space Shuttle main engine. However, no engine is in commercial production. The best large-scale aerospikes are still only in testing phases.

A normal rocket engine uses a large engine bell to direct the jet of exhaust from the engine to the surrounding airflow and maximize its acceleration â€“ and thus the thrust. However, the proper design of the bell varies with external conditions: one that is designed to operate at high altitudes where the air pressure is lower needs to be much larger than one designed for low altitudes. The losses of using the wrong design can be significant. For instance the Space Shuttle engine can generate an exhaust velocity of just over 4,400 m/s in space, but only 3,500 m/s at sea level. If a large bell (designed for high altitude operation) were used near sea level, the extra weight of the bell might not overcome the additional thrust gained. Tuning the bell to the average environment in which the engine will operate is an important task in any rocket design.

The aerospike attempts to avoid this problem. Instead of firing the exhaust out of a small hole in the middle of a bell, it is fired along the outside edge of a wedge-shaped protrusion, the “spike”. The spike forms one side of a virtual bell, with the other side being formed by the airflow past the spacecraft â€“ thus the aero-spike.

The trick to the aerospike design is that at low altitude the ambient pressure compresses the wake against the nozzle. The recirculation in the base zone of the wedge can then raise the pressure there to near ambient. Since the pressure on top of the engine is ambient, this means that base gives no overall thrust (but it also means that this part of the nozzle doesn’t lose thrust by forming a partial vacuum, thus the base part of the nozzle can be ignored at low altitude).

The Nation has a new issue out, with much of it dedicated to climate change and energy issues. Most of the articles are all available free of charge on their website (some are subscription only). 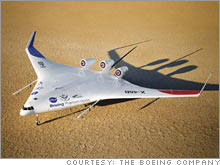 It would be a dream come true for the airline industry: A plane that uses up to 30 percent less gas to reach its destination, compared with today’s jets.

That’s the promise of the blended-wing, a radically new kind of aircraft set to take to the skies for the first time this month. Originally conceived by McDonnell Douglas and developed by NASA, the blended-wing merges fuselage and wings and eliminates the tail, reducing drag. That makes it vastly more fuel-efficient than regular “tube-and-wing” jets, according to Boeing engineer Norm Princen.

For now Boeing is focused on making a military version of the plane by 2022. But by 2030 blended-wing aircraft could be carrying commercial passengers. Last November a team from MIT and Cambridge University unveiled the SAX-40, a blended-wing design that promises to be more fuel-efficient than a Toyota Prius – and thanks in part to the engine placement, just as quiet (at 63 decibels).