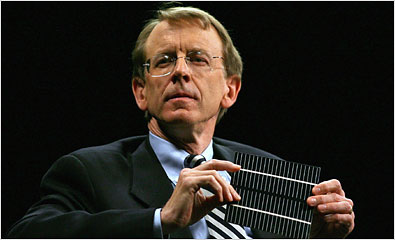 A chief champion of the cause has been Kleiner Perkins Caufield & Byers, one of the marquee venture capital firms. Its principals, John Doerr in particular, have passionately advocated development of alternative energies as a way to create energy independence and clean up the carbon-saturated atmosphere.Â  But Kleiner has also poured millions of dollars into Terralliance, a company that makes technology to enable more efficient drilling of oil and gas.

The investment underscores a fact that is much less bragged about in the valley: For all the boasting in the region about investing in clean technologies, there have also been a smaller number of bets in companies set up to promote the development of fossil fuels â€” the source of many of the problems their other investments are meant to fix…

In Silicon Valley, thereâ€™s a word for that kind of investment.

“Itâ€™s called browntech,” said Erik Straser, a partner at Mohr Davidow Ventures. One of that venture firmâ€™s investments is in a start-up called Panasas, which has developed computer storage technology to help oil companies become hyperefficient at finding new places to explore.

Mohr Davidow invests in energy markets, he said, because they are big, and have big profit potential, not foremost because they offer an opportunity to help the environment.

“Iâ€™m here to make the kind of green my limited partners can spend,â€ Mr. Straser said.