Recent events – including my own brewing exploits – have forced me to reconsider how much trash/pollution that we dump into the ocean on a daily basis. I mean, just today I drank 4 cans of soda, ate two meals out of Styrofoam containers (with three sets of plastic silverware and a stack of napkins). One you start to add things together, it’s a pretty staggering picture how much trash an average North American produces, just living a normal life. Now imagine that you actually produce something useful to society in any way, and you start to enter into a quagmire of epic proportions. I mean, I brew my own beer, which has got to be environmentally friendly in some way. However, in brewing, the cleaner your materials are the less chance you have of your beer being infected by wild yeasts. That, generally, ends up in a few teaspoons of iodine dissolved in a few gallons of water being dumped down the drain. Epic, mostly because it’s pretty clear that if and when we destroy our environment, the picnic’s over. Everything adds up.

Rant ended, I saw this article over at The Oyster’s Garter about the supposed “North Pacific Trash Gyre,” which is what it sounds like: a huge floating pile of Trash in the Pacific. Because our earth is some 75% water, it’s not a big deal that you don’t particularly notice this “trash gyre,” an effing whirpool of muck south of Cali, but it damn sure is a big deal that it’s there. And it’s the size of Texas.

The Pacific is not big enough, however, to hide all the plastic crap that comes pouring off North American and Asia. Many of the broken flipflops, lost plastic bags, abandoned waterbottles, and so forth collect in the North Pacific Gyre, which is essentially a big slow gentle whirlpool. But instead of sucking the trash down, it just collects at the center, forming a floating trash heap the size of Texas. LINK 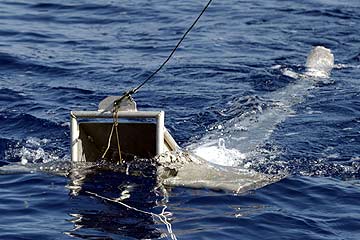 Although the articles I quoted are old, The Oyster’s Garter, apparently run by a Miriam Goldstein, is probably the best continuing blog I’ve read on this subject in my short week of research.Â  Another article over there deals with the lack of images relevant to the story:

To really get a sense of how much plastic is in there, you have to do a trawl, which entails dragging a net with a bucket on the end behind your boat. Hereâ€™s a photo of a bongo trawl taken off of southern California. (Credit: Barbeau Lab, SIO) And hereâ€™s a photo of what a normal bongo trawl should produce â€“ lots of zooplankton, a few invertebrates, and the occasional small fish.

Now, contrast this with the results of a trawl from the North Pacific Gyre. Hereâ€™s the bongo net being hauled up â€“ see how the ocean looks normal? But the contents â€“ plastic, plastic, and more plastic.* (Credit: Algalita Marine Research Foundation).Â  When all that plastic collects somewhere, you get beaches like this one in the NW Hawaiian Islands. LINK.

One dude was so struck by (what basically amounts to) the huge pile o’ shit in the ocean that he went on to found an organization dedicated to studying this situation.Â  Some of their pictures are used in this post.Â  You can find their page here: http://www.algalita.org/